Thanks to a new walking test, patients with chronic respiratory conditions are now having a faster and better recovery.

The improved results are because the test allows physiotherapists to get a precise and accurate measurement of a patient’s fitness and ability – allowing them to prescribe an exercise plan which will meet a patient’s specific and individual needs.

The incremental shuttle walk test was introduced within the pulmonary rehabilitation service at Kent Community Health NHS Foundation Trust (KCHFT). It is considered to be best practice and is in line with British Thoracic Society guidelines.

The aim was for more than 58 per cent of patients to see an improvement in their exercise capacity, following a six-week programme with us. The result was that more than 70 per cent saw an improvement.

Initially, the test was used predominantly for chronic obstructive pulmonary disease (COPD) patients, as well as those with other chronic respiratory diseases. In the past few weeks, the test has also been used for post-COVID patients.

Di Robbins, 66, from Greenhithe, who was recently diagnosed with COPD, completed a six-week programme with the team, with her regime based on results of the new test and other health and wellbeing measurements taken by the team.

Di, who is seen in our video, doing the walking test, said: “It’s been brilliant. What was prescribed was just right for me. The team helped me understand what I should be doing and how much of it I should do, to get fitter and improve muscle. I’ve been using dumb bells, which is something I would never have thought of.”

Kate Savage, a clinical lead physiotherapist who has led on the project, said: “We are getting much better results now. Patients are improving more than before, because we can now accurately prescribe what exercise they should be taking.

“Evidencing the improvement patients are making, linked to their daily living and quality of life, provides additional motivation for them and their carers to engage with rehabilitation. It also provides job satisfaction for our staff.”

The project was run using quality improvement (QI) methodology and tools. QI is used by healthcare trusts worldwide. QI is about looking at better ways of doing things and making change happen.

The test is similar to a bleep test, but is at a slower, walking pace. The patient walks for as long as they can until they are either too breathless or can no longer keep up with the beeps, at which time the test ends. The number of shuttles is recorded.

The walking test enables the operator to measure and record a patient’s fitness, health improvement and ability.

The test was first introduced 18 months ago and ran until March 2020. As it is a face-to-face test, it was paused during the pandemic and virtual consultations and assessments took place. Face-to-face tests resumed in October 2020, in a COVID secure way. 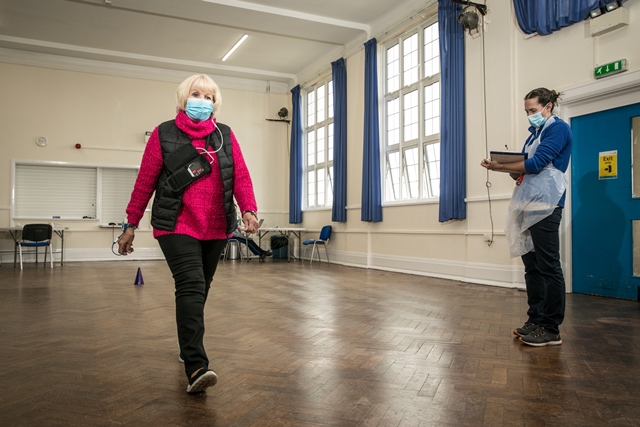 Kate said: “The project led to efficiency, due to the shorter time needed to conduct the incremental shuttle walk test. This should help to reduce waiting times for patients accessing the service.”

Carol Holt, from Swanscombe, saw her walking test ability go from 40 metres at the start of her rehab, to 190 metres six weeks later. Anything more than 50 metres is considered to be a significant improvement.

Carol, 69, has COPD and was referred to the team following a chest infection, for which she was hospitalised and after contracting COVID-19.

She said: “It has really helped me. At the beginning, I could barely walk or stand. I’d lost a lot of confidence. The team coached me and encouraged me and I’m so pleased with the results.”

Kate used a driver diagram on her project and plan, do, study, act (PDSA).

She said: “At the beginning some patients said they struggled to hear the bleeps, so we invested in speakers for each location, to make this better.

“By using QI methodology and the QI tools, this helped me to establish my aim and to make that aim more patient-centred.”

Monitors keep a close check on patients as they do the walking test and other assessments, as pictured, below.

Find out more on Kate's project on a page