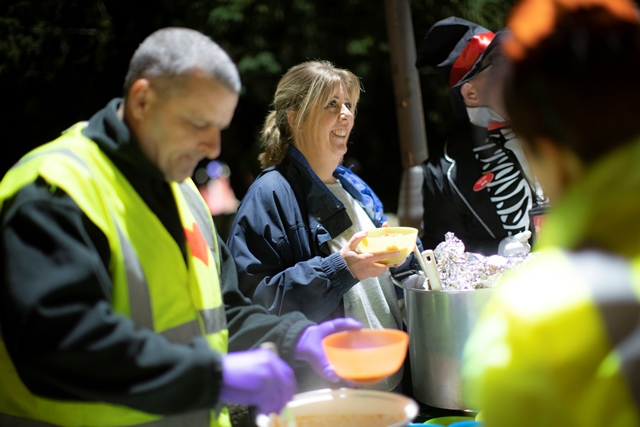 They are being run by Kent Community Health NHS Foundation Trust (KCHFT), at Maidstone Day Centre, following an approach by Maidstone Borough Council for a nurse-led clinic for rough sleepers in the town.

The drop-ins have been run as a seven-month trial, which was due to end in November, but this has now been extended until March. Discussions are also under way with other local authorities across west Kent, about running a similar service in other towns.

Complex Care Nurse Claire Knight and Head of Adult and Community Services Stephanie Rhodes are behind the project. They worked closely with other organisations to bring several services all under one roof, including midwives, a heart failure nurse and a Macmillan cancer support nurse, with one person needing end of life care.

Claire also advised patients on reducing the chances of becoming ill, healthy lifestyles and self-care – as well as where to go for support with mental health issues, such as depression and anxiety and for financial information too. She has been giving homeless people the flu jab too.

Claire even managed to get one man a bike, after he said he felt isolated and unable to get around due to lack of money. The bike was donated after she put out an appeal. Also donated were clothes, sleeping bags, tents, food and a mobile phone, to make it easier for another patient to contact his GP.

Steph said: “Rough sleepers were falling through the healthcare net and this project aims to find them and give them accessible and non-judgemental healthcare.”

“Our quality improvement project has seen us make a real difference to the lives of rough sleepers. Getting the bike for one homeless man was life changing for him. There is so much more to do and scope for providing care for this vulnerable group of people.”